Let’s face it – sooner or later, we will all need to rely on an emergency room for medical care. This may or may not be a good experience. 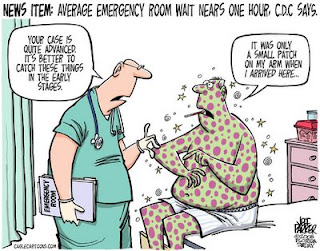 The hope is that the ED has the staff, time and space to quickly diagnose, treat and admit or discharge those needing assistance.

However, we have seen many cases where mistakes were made in the emergency room that lead to even greater problems.

Here is just an idea of what could / does go wrong in Virginia emergency rooms:

(a) I know of a case where a young man with excessive abdominal pains went to the ED – and an out of state radiologist reviewed his CT scans saying nothing was wrong. The CT actually showed an aneurysm and sadly, the young man was dead in a few days.

(b) I know of another case where the ED confused one patient for another trying to give the one, the other’s medication.

(c) I know of another incident where a patient was sent home only to receive a call the next day, asking her to return because they just realized she did have a fracture at L4 afterall.

(d) I know of people who have had severe problems in waiting rooms (seizures, heart attacks, etc.), waiting for help.

Some, but not all of these rise to the level of Malpractice.

In Virginia, while it is unfortunate and not acceptable that mistakes are made in an emergency room, you can only file a malpractice lawsuit, when those mistakes cause the patient additional pain and suffering they would not have suffered otherwise.

Of the 4 cases named above, (b) an (c) did not turn out to be lawsuits because thankfully, the patient was not physically hurt by the ED errors. Angered by them? Yes. Frustrated? Absolutely. But unless the delay or misdiagnosis causes direct harm – – you don’t have a lawsuit.

My advice to folks who have suffered in an ER but not been damaged, is to be grateful they were not hurt, and become advocates for better care. Write a letter to the Director of the ED. Ask to discuss the mistakes. Share your concerns with those who will listen…

Wonder if you have an emergency room malpractice case. Call us today for your free consultation and case evaluation.